The Danger Behind Stinging Insect Allergy 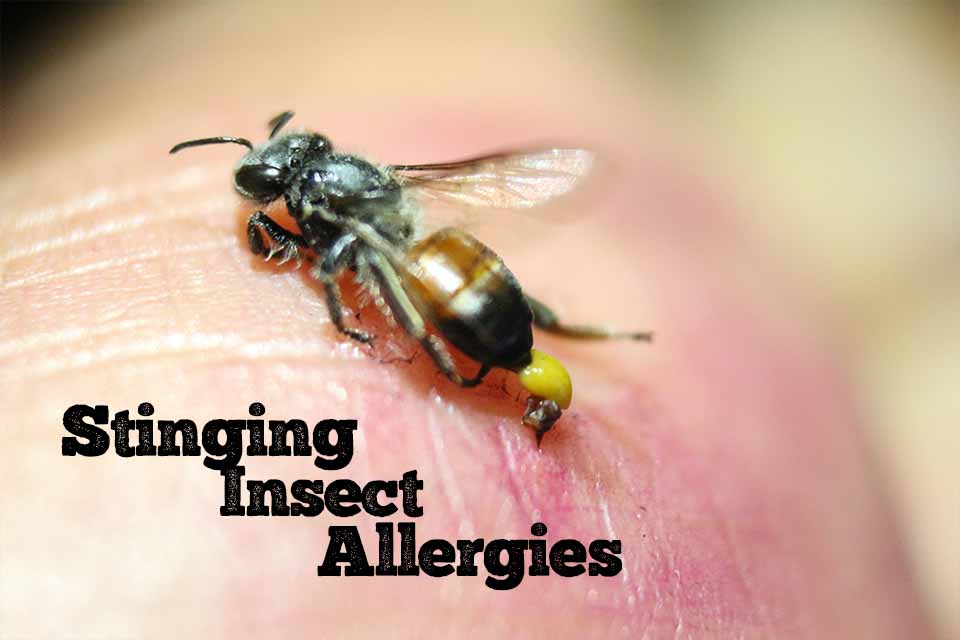 Up to 5 percent of people in the United States are affected by stinging (and biting) insect allergies. In Florida, the majority of the problem insects are bees, wasps, yellow jackets, hornets, and the unforgettable fire ant-all of which can pack a big punch.  Typically, wasps build honeycomb nests under eaves and rafters, while hornets construct larger papier-mâché nests that hang in trees and shrubs Yellow jackets build their hives in the ground, under logs, or in walls. And, as we Floridians are well aware, we must watch our step outside to avoid fire ants.

What determines whether someone might require immunotherapy for a particular insect-venom allergy depends on the intensity of his or her reaction.  A typical local reaction after an insect sting is mild redness, warmth, swelling, and pain at the sting site. The pain is most often transient and disappears on its own within several hours.  Sometimes, people may experience a more extensive local reaction, with swelling extending from the sting site to cover a large area.

The most dangerous allergic reaction is known as a generalized reaction (anaphylaxis) that can produce shortness of breath, wheezing, dispersed hives, airway swelling, increased heart rate, loss of consciousness and even death.  These life-threatening allergic reactions usually occur within 15 minutes of the sting, rapidly progress and require immediate medical treatment with epinephrine, antihistamines, and even corticosteroids.

At times, toxic reaction, not an allergic reaction, may follow as a result of multiple stings. Because insect venom contains many pharmacological agents, vascular collapse, hypotension, shock, and even death may occur.

If you have a history of allergic reaction to an insect sting, your chances are 60 percent or better of a similar or more serious reaction if you are stung again.  In these cases, skin testing should be performed to confirm the allergy. Then, venom immunotherapy (injections of the offending venom to stimulate the immune system and to reduce the severity of future reactions) should be initiated.  The process is usually completed in three to five years, and venom immunotherapy has proven to be 97 percent successful in preventing future allergic reactions.

Even after patients undergo immunotherapy, it is advised to carry the self-injectable epinephrine (Epi-Pen), because not all patients will maintain a lifelong immunity to insect venom.

A word to the wise: If an insect has stung you, immediately scrape the stinger out with a blunt edged object, such as an index card or credit card, without squeezing it. Avoid directly pulling the stinger out as this can burst the venom sac and release more venom.  Next, wash the area with soap and water, apply a cold compress or ice pack for 10 to 20 minutes, and take Tylenol to ease the pain and Benadryl for the itch.

Atopic dermatitis (AD), also called atopic eczema, is a chronic allergic skin disease that usually occurs in people who have an atopy — a tendency to develop an allergic reaction. These people may develop any or all of three closely linked allergic conditions: atopic dermatitis, asthma, and hay fever (allergic rhinitis). Atopic conditions have a genetic predisposition and, therefore, usually run within families. However, up to 30 percent of atopic dermatitis sufferers have no identifiable family history of atopic disease.

People with atopic dermatitis have a defect in their skin that prevents it from staying moist. Their skin is dry, itchy, and easily irritated. Scratching dry and itchy skin causes a rash, leading to more irritation, and more scratching. The inflamed skin allows irritants, allergens, bacteria, and viruses to easily enter, causing even further inflammation. Food allergens and inhaled allergens, particularly dust mites and animal dander, can also aggravate the condition.

Atopic dermatitis usually begins during the first year of life and always within the first five years. It is often at its worst between the ages of two and four. However, it generally improves after 2-4 years of age and may clear altogether by the teens. In babies, the rash usually starts on the face or over the elbows and knees, which are easy to scratch and rub. It may spread to involve all areas of the body. Later in childhood, the rash typically settles in the elbows and knee folds. Other common areas for rashes include the hands, feet, scalp, or behind the ears.

The most important prevention and treatment for dry skin is to “soak and seal” water in the skin daily. After soaking in a bath, pat dry and immediately apply a thick layer of moisturizer, such as petroleum jelly or cream, to seal in the water. Chemicals, solvents, soaps, detergents, fragrances, and many synthetic fabrics are irritants and should be avoided. Cotton is best for all seasons, especially summer. For cool weather, layering is a great idea.  Low humidity, high humidity and sweating can dry and irritate the skin. Therefore, avoid overheating the home. Since children with eczema are often prone to other allergies, keep family pets outdoors or at least off beds or sofas. Control dust mites with coverings for pillows and mattresses and frequently wash bedclothes in hot water.

Antihistamines such as Benadryl, particularly at night, are crucial to controlling itching. Topical steroids may be used to calm the inflamed skin. Other special topical creams such as pimecrolimus cream or tacrolimus ointment also treat inflammation, but do not cause steroid side effects. It is also important to treat infection early with antibiotics. In rare but severe cases, immunosuppressive agents such as cyclosporin, methotrexate or azathioprine, may be needed.